ICC Awards 2021: As part of the 2021 edition of the ICC Awards, the International Cricket Council (ICC) announced Daryl Mitchell as the winner of the ICC Spirit of Cricket Award for 2021.

Mitchell won the award for his gesture of refusing to take a single in the high-pressure ICC Men’s T20 World Cup semi-final against England in Abu Dhabi on November 10, 2021. Earning the respect of the international cricket fraternity instantly, Mitchell becomes the fourth New Zealand player to win the award, following the footsteps of Daniel Vettori, Brendon McCullum and Kane Williamson. 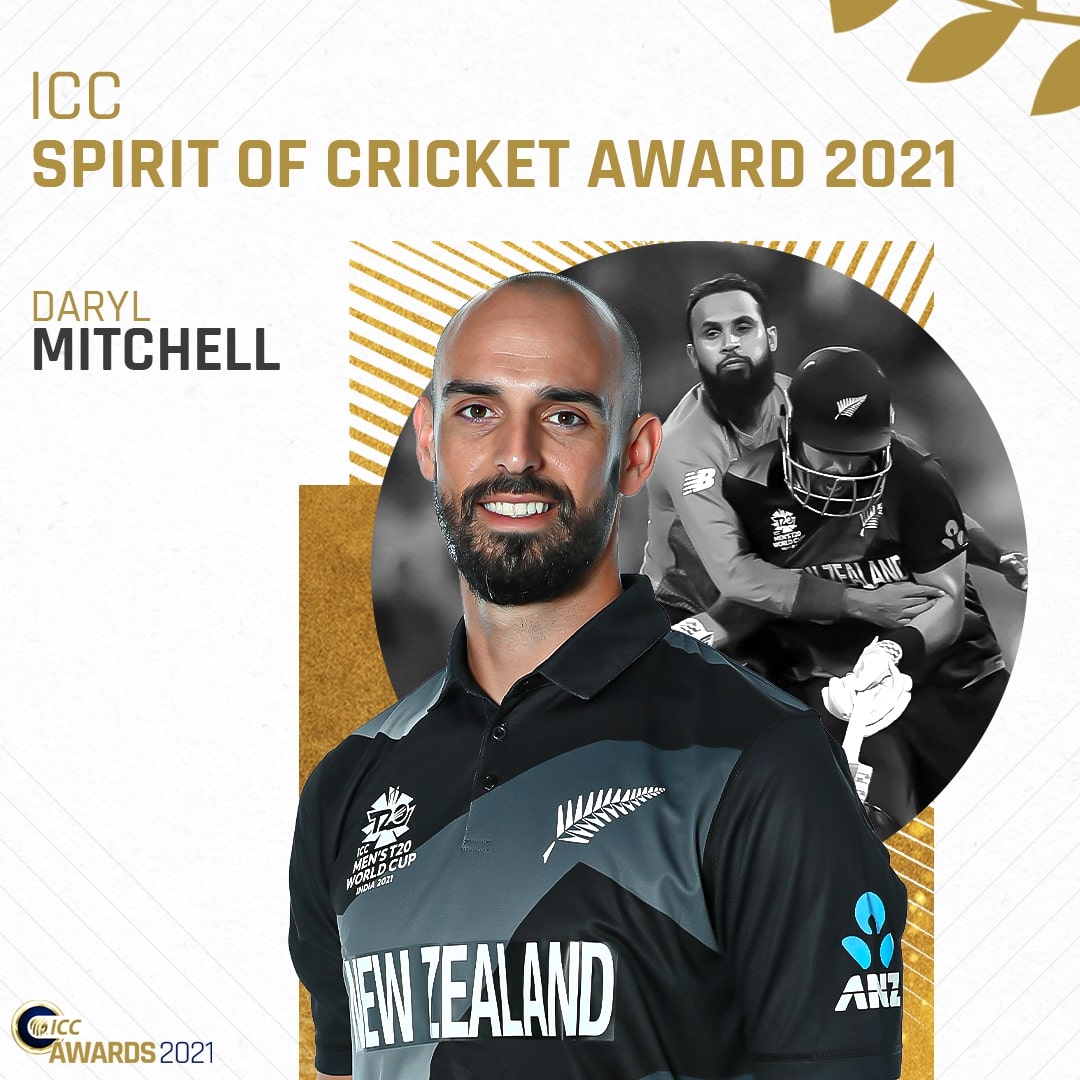 The incident took place in the first delivery of the 18th over. Bowled by England spinner Adil Rashid with Jimmy Neesham on strike. New Zealand at that moment required 34 off the final three overs and despite the match situation. Mitchell refused to take the single as he felt he was in the bowler’s way. He tried to stop the ball on his follow-through. Neesham had hit the ball firmly slightly wide off Rashid’s reach. And he collided with Mitchell as he went on to stop the ball. Neesham was eager to take the single and had come down the wicket seeing the opportunity. But was turned down by Mitchell from the other end.

Commenting on receiving the honour and reflecting on that moment, Daryl Mitchell, said:

“It is a real honour to receive the ICC Spirit of Cricket Award and it was absolutely amazing to be part of the ICC Men’s T20 World Cup that happened in UAE last year. Reflecting back, it was a pretty tight game against England at the semi-final of the tournament with only a few overs to go, Neesh hit a single down to long-off and I think I obstructed Rashid who was trying to get to the ball.

“We pride ourselves as a team, in the way we play our cricket. And I guess that’s the spirit of cricket. Personally, I felt like I got in the way, and we wanted to win but on our own terms. I guess it paid off in the long run, that we won the game.

“We want to win every game. But we don’t want to do it in a way that goes against the values of cricket. The spirit of cricket is very important. It is a platform for young cricketers to watch and learn. And to get inspired to play the game and go about winning it in the right way. At the end of the day, it is just a game, and it is a game that we all love. And we are very lucky to be able to do that in the right way.”

“Personally, there are more important things than winning a game of cricket and at that moment it was the right thing to do.”

This spirit is described in the preamble to the laws of cricket:

“Cricket is a game that owes much of its unique appeal to the fact. That it should be played not only within its laws but also within the spirit of the game. Any action which is seen to abuse this spirit causes injury to the game itself.”

The preamble goes on to say: “The spirit of the game involves respect for: